I’m a big advocate of perseverance. Of course, in order to persevere in something you need first to get started. Starting is hard, but unavoidable. Click To Tweet Brian Tracy in his book “Earn What You Are Really Worth” illustrates the laborsaving trait of perseverance:

“When you look at successful people, you find that they are very much like the plates spinners in Vaudeville acts. They get things started; They get the plates spinning. Then they keep them spinning, knowing that if a plate falls off or something comes to a halt, it’s much harder to get it restarted than it is to keep it going in the first place.: Brian Tracy

Your Brain’s Paradigm May Be Your Ally

Once you start working on your dream, keep up the hustle. The road may be long and rough, but stopping every five minutes doesn’t make it shorter or better. On the contrary, the more often you stop, the less you are inclined to start going once again. 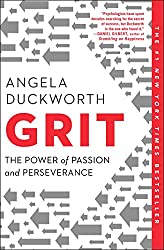 Your brain’s paradigm is saving your energy. I think human subconscious has a much better grasp of reality than we would like to think. For example it understands only the present tense. Why? Because, it’s all that ever will be. Past doesn’t exist anymore. Future doesn’t exist yet. Only now counts.

Similarly, your subconscious mind grasps the concept of perseverance. Habits are stored in the most primal part of brain which we share with birds and reptiles. They are perfect energy-saving mechanisms. Once the trigger ignites the action, you go through the carefully orchestrated and memorized sequence of activities. You don’t need to think about decisions, or plan, or coordinate anything.

Your Subconscious Prefers to Keep Going

Nevertheless, habits are almost-physical construct in your brain in the form of neural paths. Perseverance as a concept is a bit more advanced. That’s why it’s so amazing that “dumb” subconscious instinctively pursue it. It doesn’t need Brian’s preaching. It eagerly employs persistence in order to preserve your energy. It feels that the vicious cycle of starting, stopping and restarting drains the energy. It prefers to do nothing (that way no energy is spent), but if it notices that the action is unavoidable, it prefers consistency rather than the lack of it.

That’s why streaks really work. Once you are committed, your brain is cooperative. Action is less costly than the process of restarting. It actually enjoys realizing the single chain of the streak and releases dopamine as a reward for an accomplishment.

Just Keep Going, One Action at a Time 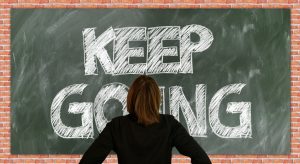 It also explains What the Hell Effect. When you break the streak your brain treats the situation as the beginning of the process and resists. Doing 100 pushups is fine, IF you’ve made them yesterday and the day before (and the last 7 years). But doing 100 pushups one-time? Heck, it’s an effort. It’s an energy expenditure!

When you break the streak your brain goes on overload providing all the kind of excuses to restrain you from action. Now inaction is the more familiar and less costly option. If you have done nothing yesterday and a day before that, now inaction gets profit from the law of perseverance.

That’s why keep going toward your dream. Make your subconscious your ally. Employ habits. Build a streak. Get satisfaction from this feeling of continuity.

And when you slip and fail—get up as soon as possible! The longer you lie down and beat yourself up for your failure, the more likely you will stay down and be a failure.

Make Perseverance a Part of Your Identity

Keep going. That saves your energy. Make it easier to move forward than to stop. Make perseverance the part of your personal philosophy and self-image. When you do that you simply will not be able to stop.

I identify myself as a writer. I can’t imagine myself not writing 1,000 words a day. Writers write. Who would I have been if I wouldn’t have written? Not myself. Someone else. My self-identity which was carefully constructed for decades would have been in danger then. I would have had to construct another one and again it could have taken me decades. What a colossal energy expenditure! Better to stay who I am and write these damned 1,000 words.

You can harness the power of your subconscious mind in the pursuit of your dream. Just keep constantly in your consciousness the fact that perseverance is the less costly and easier option.

​For more on how to keep going and perseverance read these articles:

How to Build Willpower, Self-discipline and Perseverance