People often get stuck with certain ways of framing their problems that actually prevent them from creating solutions. Usually they learn these frames from other people, especially people who swear that a particular frame worked for them. But that doesn’t mean the same frame will work for everyone else.

Suppose you define a financial problem as a mindset problem or a problem with limiting beliefs. These limiting beliefs are holding me back! I’m stuck in a scarcity mindset! This is why I’m still struggling! 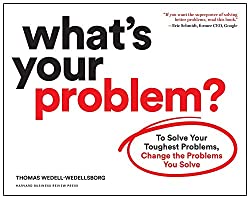 Maybe your mindset could use some improvement, but you’d be surprised at how many problems don’t actually require mindset shifts in order to solve them. I’ve met plenty of wealthy people, and I can assure you that many of them have the same old limiting beliefs about money that everyone else does. Meanwhile some people think they need to resolve all their limiting beliefs about money in order to attract more money. That isn’t true at all.

Similarly you can have a really abundant mindset towards money and still not attract much of it. I’ve met some financially broke people who seem to have abundance-aligned mindsets, yet money doesn’t flow to them very well. They may have good mindsets, but a good mindset doesn’t pay the bills.

Framing a problem as a mindset issue may not actually get the problem solved. This is especially true for financial and social problems.

You may also find such problems easier to solve if you define them as spiritual problems. What would a spiritual solution look like? This could include looking at the character sculpting purpose behind the problem. You’d see the problem as meaningful and purposeful, which can reduce your resistance to it, so you approach it as a worthwhile invitation rather than a curse.

When you run into a problem that isn’t budging even after years of struggle, clarify how you’ve been framing it, and switch to a different frame for a while.

Don’t be a one-frame wonder. You will get stuck if you do that. Eventually a problem will come along that doesn’t fit your frame very well, and it will be nearly impossible for you to solve it using your “one frame to rule them all.”

We fall into these traps because a good frame will work until it doesn’t. You may get good results for some problems using a mindset frame, but eventually you’ll encounter a problem that isn’t impressed by your mindset-based approach. It will persist no matter how much mindset work you do. But a behavioral solution might solve the problem for good.

Many problems become much easier to solve when you switch frames. Look at the problem from a different angle. Ask: How else could I define this problem?

And if you can’t think of at least 10 different ways to define your problem, well… then you have a mindset issue.