Does procrastination ever stop you from doing what you really want to do with your life? Maybe you want to get in better shape, go back to school, start your business or start investing money in the future.

Cause #1: No Written Plan

You’ve probably already heard that failing to plan for something is pretty much planning to fail. If you don’t have a written plan to guide you through something step by step, you’ll be paralyzed by uncertainty.

Not bad advice, and this is the first cure for the disease of procrastination: Follow Mark Twain’s advice.

Cause #2: Buying Your Own Baloney 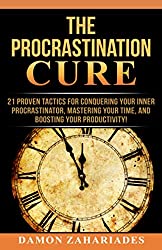 Every time you tell yourself you’re going to do something that you don’t end up doing, you’re lying to yourself.

But that’s not the main problem… the problem is that most procrastinators really do believe that they ARE going to take action, just not now.

They rest assured that if they don’t take action now, there’s always tomorrow.

The cure for this is to stop believing yourself when you say: “I’ll do it____,” and to instead work on a plan for starting to fulfill your commitment right now.

Many times, the problem with procrastination has nothing to do with not following through.

Instead, the problem is with making a commitment that you don’t really want to fulfill just so that you can please someone else.

It might feel very good to tell someone yes and very bad to tell them no. But if you end up going back on your commitment later, you’ll eventually burn your bridges with that person.

The cure for approval addiction is to exercise your “no” muscle. Practice saying no to things that you know you won’t follow through with.

Don’t say “I’ll think about it” or “I’ll get back to you,” because this is just verbal procrastination. Instead, get comfortable with saying no… and when you do, your “yes” will be much more valuable.

This is without a doubt the leading cause of procrastination, and the hardest one to overcome.

Perfectionism causes you to delay taking action or to take forever to complete something because of constant revisions and excessive planning.

This kind of procrastination is based on the fear that if something you do is not good enough, YOU aren’t good enough.

The cure for this is to separate your identity and sense of self-confidence from your performance, even when you do something well. This will take the edge off of perfectionism and keep it from paralyzing you.

Cause #5: Too Many Options

You might have heard this saying: “If you chase after two rabbits you lose them both.”

If you’re someone who has diverse interests, you’ll struggle with procrastination until you learn to make and cultivate a certain degree of selective ignorance in your life.

Too many options can cause you to get stuck in analysis paralysis and never get around to focusing on one thing only.

The cure for this is to sit down and write out all the things that are most important to you, and to start focusing your attention only on the things which you have time and energy for.

Chances are, if you do this and get to work, you’ll have time to do the less important things later. If not, at least you’ll have done something instead of being paralyzed by too many options.

If you’re in the habit of saying “Let me think about it” or of seeking others’ opinions for hours and hours before coming to your own decision about something, you’ve fallen into the habit of indecisiveness.

Get rid of that habit before it takes your dreams from you.

One of the most common character traits of highly effective people is that they are decisive and not influenced by the opinions of others.

The cure for this procrastination is to develop a set of criteria by which you can make all your decisions: decisions about your health, career, relationships and finances.

Having a long-term vision will help you to build decisiveness by asking yourself the question: “Which will be the best decision for helping me reach my long-term goal?”

Too many people buy into the myth that procrastination is a character trait which is somehow “in your blood.”

In reality, procrastination is nothing more than a habit-and like any other habit, can be broken through consistent repetition of more preferable behaviors.

If you’ve fallen into the habit of procrastination, it’s likely that there are patterns in your life with this habit.

The cure for this is to develop all of the following habits:

Now you know what you need to do. Don’t think about it-just get started.

About the Author: For tools to help you get back on the track to success, visit http://www.healthandwealthattraction.com