While it’s good to set goals and establish priorities, there’s a risk when you become myopically focused on a single outcome.

Single mindedness can be okay for a while if you’re progressing nicely, but if you’ve gotten stuck and the needle isn’t moving, this stuckness can prevent you from making progress in any area of life. And that can really make you feel trapped or stagnant.

Have you ever seen the following issues in yourself or someone else?

Have you ever told yourself that you really, really have to fix one particular area of life before you can properly improve another area of life? 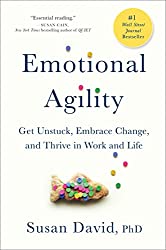 Sometimes it’s really hard to make forward progress in your area of greatest stuckness, even when you make that area your #1 priority. Sometimes it just won’t budge no matter how much force and effort you apply.

This can be immensely disheartening and draining. In particular, I found it super draining to keep trying to fix my finances when I was broke. I only fixed this area by shifting my attention to different parts of life that eventually led to good solutions for that stuck area.

I see similar patterns in others who keep trying to force progress in an area that isn’t progressing.

Give up… at least for a while. Surrender that stuck area to stagnation. Go invest what little energy you have left in some other area of life that you’ve been neglecting.

You’ll probably be astonished at how quickly you can make progress in a different area of life that isn’t being choked by the same degree of stuckness.

Maybe your finances are terrible right now, but you might make serious progress in your health and fitness at this time. Or switch your focus to having fun for a week or two.

Maybe you’re stuck with health problems, but you could potentially make wonderful improvements in your social life if you give it more attention (at least online at this time). A richer and more aligned social life could actually help you become healthier.

Many people, including me, have found that it’s when we give up and go attend to some other aspect of life, we finally start progressing in our primary area too – often in ways we never would have predicted.

I’m not entirely sure why this is – it just works so damned well though.

We could use the Law of Attraction frame and say that shifting focus elevates your vibe, and that helps get the stuck energy flowing again. We could say it’s due to stress reduction or a confidence boost. We could say it’s due to freeing up mental resources and thereby restoring your problem solving abilities. We could say that there’s a social effect, where more people may notice that you’re not such a Debbie Downer anymore, and now they’re happier to connect with you and bring you aligned opportunities and invitations.

How we explain this isn’t what’s most important here – use whatever frame you like as long as it gets you moving in some other direction. Just try to be open-minded about the possibility for non-linear progress. Realize that there are multiple potential reasons why it may be wise to shift your focus away from your #1 priority for a while.

There’s a good chance you already sense this instinctively. Do you notice a subtle voice nudging you to shift focus away from your stuck area? Do you think there may be a part of you that knows that the path to a solution requires some lateral movement first?

I know it can be hard to rationally explain to other people why you should shift gears. It’s like owing money to a gangster. You can’t justify that the best way to pay them back is for you to take a break from focusing on your finances for a few weeks. You may feel like you’ll lose your kneecaps if you go that route.

Try not to create that type of relationship within yourself though. Realize that breaking away from your #1 priority may be an intelligent and rational choice, even if your inner gangster doesn’t trust that it will work. At some point you have to face the hard truth that you’re not progressing and that continuing down the same path isn’t magically going to start working in the next week or two.

I’ve stumbled upon some of the most amazing advancements on my path of personal growth from lateral exploration. Here are some examples:

Getting stuck happens. Staying stuck is a choice.

Sometimes the energy doesn’t want to flow forward. Sometimes it wants to flow sideways. Maybe from a multidimensional perspective, sideways for you is actually forward in the grand scheme of life, the universe, and everything.

Recognize when the energy isn’t flowing in the direction you expect, and pause to observe where it does want to flow. Stop exhausting yourself with tiresome paddling, and find the current again.

Don’t be stubborn when you get stuck. Get back in tune with the possibility space. Stay humble, and remind yourself that you don’t know everything. Sometimes the fastest route forward is exactly where you don’t expect to find it.