When people don’t practice effective boundary management skills, they often succumb to problems like these:

Co-workers and bosses that don’t carry their weight

Roommates or neighbors that violate their quiet enjoyment of their home

Relationship partners that lie to them

Friends borrowing money or possessions and not returning them

People who repeatedly treat them with disdain or disrespect

Then they want to know what to do about it. They usually feel a bit beaten down in dealing with such problems for so long.

What causes these issues in the first place? Is it just other people’s bad behaviors? Were you just unlucky?

Questions I like to ask are: How long have you been tolerating this behavior? What have you done to stop it? What will it actually take to stop it? 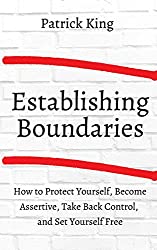 What’s really stopping them much of the time is their resistance to conflict or to hurting the other person emotionally. This avoidance behavior is what’s really keeping them stuck.

Realize that being firm with people now and then is really important for your own sanity Click To Tweet And the issues usually aren’t personal per se; they’re usually behavioral. You probably don’t need to eliminate the person from your life if they’re willing and able to change the problem behaviors that are violating your boundaries. But if they aren’t both willing and able, then removing the person from your life may be your best option.

Being serious and firm and expressing some emotion in affirming your boundaries and the consequences for violating them can help the other person take you more seriously. This can increase their willingness and their ability to remedy the situation. But not all people will respond positively. Some will try to minimize your concerns. Some just won’t be willing at all, in which case your alternative is pretty clear. If you don’t see strong willingness and the expectation that the behavior will be corrected, consider that it may be time to move on from this relationship.

You deserve relationships that respect your boundaries. To accept less is to disrespect yourself. What I see in many of the people who email me about these issues is that they’ve lost much of their own self-respect. These social problems weigh heavily on them, and they don’t like how they’re being affected.

How many words does it take to establish a firm, clear boundary with someone along with a clear consequence, such that if they violate it again, it’s game over for your relationship with that person?

Here’s my boundary. This behavior you’ve been doing is completely unacceptable to me. If our relationship matters to you, I need you to permanently discontinue this behavior. If you violate my boundaries again, I’ll do X, Y, and Z.

What you propose for X, Y, and Z depends on the situation. It may include no longer working with the other person, cutting off all communication, declaring an end to the relationship, someone moving out, kicking someone off the team, breaking up, etc.

If necessary remember that you can walk away and leave. Lots of people have had to make that choice.

For some situations where the boundary violations seem irreparable, how long does it take to say, “We’re done”?

Are any relationships really irreparable though? From an ideal standpoint, you might assume that most could recover, given enough time and effort, but balance this with how much the relationship matters to you and whether you think the likely effort required to repair the relationship is worth it. Also consider whether the relationship could be restored to 100% or if the best you’re likely to recover is something like 70%, with the other 30% being some enduring loss of trust and respect. Sometimes the damage is just too great for recovery efforts to make sense.

If I can close out a boundary violation with two simple words, even though it ends the personal relationship, but the alternative is to invest dozens of hours of emotionally draining discussion just to get back to 70% (at best), I’ll probably conclude that letting go and moving on is the best course of action. There are plenty of other people to connect with in this world, and most of those connections won’t involve boundary violations.

I know it really sucks when you must do this with a relative. It’s one of the hardest things ever for many people. But it does lead to relief, and it invites a redefinition of what family really means to you, which may not be the same as relatives.

Boundary management isn’t just something you do once. It’s a lifelong habit that requires ongoing practice. Think of it as an important life skill. When you fail to practice good boundary management in one situation, you’re setting yourself up for more boundary violation problems. When you practice this skill, you’re building up your ability to maintain better boundaries in the future.

Many people, including me, built stronger boundary management skills as a result of dealing with repeated boundary violations earlier in life. We got tired of the frustrations and decided to figure out how to solve these types of problems. We got past the wishful thinking phase and started accepting that some people just don’t belong in our daily lives.

I accept that boundary management is something I’ll have to keep practicing for the rest of my life. Fortunately I’ve had a lot of practice with it over the years, so I don’t mind it so much. It does get easier over time, perhaps even becoming semi-instinctual.

I think this skill has a lot to do with cultivating self-trust. If you’re struggling with this part of life, you’ve probably been getting plenty of instinctual signals, such as the desire to be firmer or the possibility of cutting off all ties and just surrendering to that. But you may not trust those signals enough to act on them yet. Many people will only lean in this direction when the frustration and desperation are intense enough; they’re finally fed up and have to do something about it. But with more practice, you can begin acting on more subtle signals before problems have beaten you down to such an extent. You can spot potential issues earlier and nip them in the bud. It’s like you develop better prediction circuitry for noticing when a potential boundary violator steps into your space, and you practice prevention before any violations can even occur.

Boundary management is such an important issue that I actually cover it within every major course I’ve published, each time from a different angle.

Almost everyone starts out too tolerant of boundary violations. When our boundaries are violated in childhood, we don’t have the skills to be firm, so tolerating unwanted behaviors (perhaps through gritted teeth) may be our only realistic option. But as an adult you have more options, such as declaring which behaviors you’ll accept from others and which you won’t.

The long-term benefit from good boundary management is increased appreciation for the aligned people in your life, who may not show up in much quantity till you maintain and enforce better boundaries. It’s a real pleasure to connect with people each day who respect and honor your boundaries, and you respect and honor theirs.

Lastly, consider that if you don’t practice good boundary management, the very best matches for you will probably keep their distance because they’ll sense that you aren’t emotionally ready to invest yet. When your energy is tied up in dealing with boundary violations, you won’t have much capacity to invest in more mature and supportive relationships. Boundary violations clutter your life with junk relationships, crowding out the more nutritious ones. If you don’t raise your standards and pull yourself out of the swamp of boundary violations, you’ll miss out on so much of the real joy of human connection. If you let that happen, that’s on you. If you don’t say a firm no to the misaligned, you’re saying a firm no to the aligned.