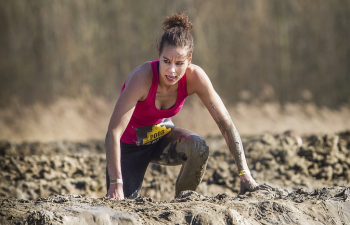 There is zillion ways to build those traits, however 99% of them are not really applicable for average mortals.

Thus, let’s talk about some things that can help you starting with little to no willpower, self-discipline or perseverance.

First, it will be amazingly useful, if you can shift your thinking about those traits. Normally, those traits are considered something above-human, difficult and tiresome.

In reality they are simply character qualities, like any other (picture self-confidence, patience or diligence here). What is more, it’s much easier to develop and maintain them than to struggle through life without them. Take a closer look at below chart: 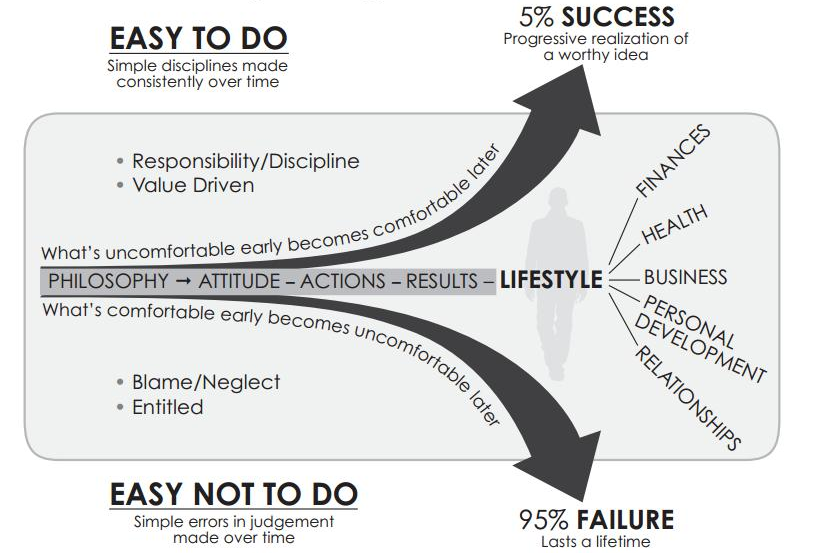 Lack of discipline or inconsistency move you further along the downward curve, straight to failure and a life failure at that. It is enough to develop the traits in question and you will automatically switch into the upward curve and your life journey will be accelerated the longer you practice them.

Yes, it’s tiresome to build those qualities, but only in short-term. In the only meaningful time horizon in human life – decades – those traits are actually much easier to live with.

The course covers starting three habits, ideally for your purposes. Pick one thing you don’t really like, so you will train your willpower.

Pick one thing that has to be done in a disciplined way, e.g. weighing yourself, paying bills or tracking your expanses. This one will help you with self-discipline.

Pick one thing that you want to do for the rest of your life, for example exercises. This habit will build your perseverance.

The Tiny Habits course will teach you how to develop those three habits not by theorizing, by practice. In a week you will have nucleus of three new habits that will cultivate the three traits you want to build.

The Art of Persistence

Here comes the silver bullet: focus on perseverance and the two other qualities will follow. When I started turning my life around and building new habits I had no regard for willpower or self-discipline whatsoever. I still have them in a little esteem.

By external standards I have an iron willpower and am self-disciplined like a Marine. But I don’t care about this at all. I focus solely on perseverance.

At the beginning I took on faith the Slight Edge model (see the chart above) as a probable approximation of reality. In a couple of months I became convinced that this IS reality. Thus, I have been caring only about doing my daily disciplines.

I didn’t care if doing them cries for exercising willpower or not. Some of them were very easy for me (like reading a book written by a saint for 10 minutes a day), some were excruciating (like studying professional documentation for 10 minutes a day). I was interested only in the output: did I do them or not? Nothing else mattered for me.

I was obsessive about doing my habits every day, I built habit streaks like crazy. Breaking a consecutive streak of my habit was unimaginable for me. When I finally broke a few it was a cause for a mild depression and self-loathing sessions

I was developing new habits and doing it effectively. Hence, I built willpower and self-discipline as well. Remember? Habits are the only reliable way to change yourself. I changed myself, because I was interested only in persevering in doing my habits.

Your discipline doesn’t have to be lofty to build your perseverance. It has only to be consistent. Do the same thing today, tomorrow and always. That’s easy. That’s simple. That doesn’t involve mental effort nor much time.

Even if you pick only easy habits to develop, your self-discipline and willpower will grow. Once you grasp the power of habit, you don’t stop at one or three of them. You develop two or three dozens of good habits.

And once you have to juggle dozens of daily habits, even tiny and easy ones, you will need to employ both willpower and self-discipline to succeed in maintaining them.

The easiest way to develop any trait, by far, is to spend time with people who already possess this trait. If you want to have a strong will, great discipline or infallible perseverance, spend a lot of time with folks who already have them.

We are natural social sponges. We absorb everything: vocabulary, gestures, tics, habits… and character traits. This is how children are learning how to live. This is one of the primary functions of our brains.

“You are the average of the five people you spend the most time with.” – Jim Rohn

This hack allows you to build self-discipline, willpower and perseverance seemingly without your effort. You will become more like people you interact with. Period.

The only way not to become like them is to be 100% mindful in their presence and torpedoing their every action and word in your mind:
“Oh, he has it easy, because he never struggled with…” or
“Oh, I’m not like her, because I had a difficult childhood” or
“Well, of course he can afford to wake up early, he has no kids, so he doesn’t have to stay up late to clean the whole mess and prepare for the next day.”

If you are a master complainer, you may already habitually negate every positive influence in your life. In that case, start paying attention to your self-talk. Even if you are not constantly negative, it’s a good idea to get a grip over your self-talk, so you won’t dispute the positive influence of others, but simply absorb it in accordance with the human natural social mimicry.

That’s it! A crash course on developing willpower, self-discipline and perseverance for normal people.

One thought on “How to Build Willpower, Self-discipline and Perseverance”