In the middle of last month, I set myself a 45-day discipline challenge, just to see what my mind would do.

I like the idea of pushing myself out of my comfort zone, and so I decided to take on 12 things at once, which is against my usual advice!

So my challenge for 45 days was to follow these 12 things each day:

I should note that none of these is individually that hard for me, and I’ve done them all before at different time. Even putting them all together isn’t crazy hard — the challenge is sticking to them for 45 days to see what happens in my mind.

And it turns out, a lot happens in my mind!

The first few days were actually a lot of fun. I get excited at the start of a new challenge, and I seem to relish taking on hard things. 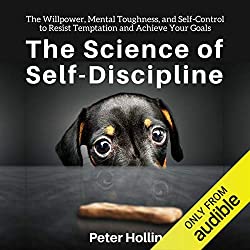 I started waking at 6am, with the intention to slowly move it earlier. That was a little bit challenging, as I’d been waking at 7am before that, but I really enjoy the quiet morning time, and getting more of that was nice for me.

I became much more consistent with morning and afternoon meditation, even though I often saw my mind coming up with excuses why I should skip them. I saw the excuses, and just did them.

Cold showers were not new to me, but I hadn’t been doing them in awhile. I definitely don’t enjoy them, but they’re not the worst thing. I was able to embrace them and use them as a meditation. (Note: I only do the cold part for a couple minutes at the end of a shower.)

Fasting was also not new to me, but it was still challenging. I’d been eating my first meal between 11am – 12pm, so I pushed it until 2-3pm, and found myself really wanting to eat by noon. Hunger is hard for me, not because it’s painful but because my mind really tries to find a way around it.

No alcohol was also not new, and honestly I’ve been drinking way less this year — not every day, and often only sips of my wife’s wine. That said, I saw myself often tempted to sip her wine when it was right in front of me.

The rest of the stuff was easy — I enjoyed the walks, and reading and studying and doing my focus work was all lovely.

The Harder Stuff in the Discipline Challenge

The first week wasn’t too tough, but after that, I found a few things particularly hard, and it was interesting watching my mind:

That’s what I faced the 2nd and 3rd weeks. The 4th week was not a success … read on to hear about it.

I did not do as well the 4th week. I became focused on other things, and it turns out it’s hard to focus on many things at once. Who knew? 🙂

I’ve still been very consistent with a few things — no alcohol, studying, exercise, doing my first MIT early. I’ve missed a few walks lately, though, for social reasons. I was super consistent with meditation twice a day until this week, again for social reasons. I’ve slept later than usual a few days in the last week, because of visitors and travel. I’ve missed a few cold showers because I’ve earlier been in a rush or I forgot.

Overall, I’ve been less focused and consistent in this discipline challenge. It’s interesting because my mind is so less interested and excited in this challenge now, and in some ways wants to just give up and forget about it. I haven’t been reporting to anyone, which has probably been a mistake, because if I was reporting it, I’d probably be much more motivated to remember.

I’m not feeling shame about the lack of consistency lately — that’s not what this challenge is about. It’s about learning about my mind, and I’ve definitely done that. I think if I only had one thing to focus on each day in this challenge, I’d be much more focused. So it’s interesting to see myself try to manage 12 things at once.

A Return to Focus in the Discipline Challenge

Writing this post has been good, because it has returned my focus. With that in mind, I think having a journaling habit helps a lot because you reflect on how things are going and can re-commit and re-focus yourself. I haven’t been journaling lately, but if I do it at least once a week, I think it might be almost as good as having some accountability (which really is the best, in my experience).

So I’m committed to returning to my challenge (as much as I’m able, given that we are going to have half a dozen visitors this week).

I really do love most of the things I’ve challenged myself to do. Most of them are what I’d like myself to do when I’m in my most open, wise state of mind — which is when you want to decide these things, not when you’re facing the discomfort.

We’ll see how many of them I decide to keep when the month is over, but I think at least half are keepers! I’ll let you know in a couple of weeks.

More on the discipline challenge:
A Creed for Self Discipline
The Simplicity of Discipline
How to Build Willpower, Self-discipline and Perseverance
Tweet
Share
Pin
Share
0 Shares

One thought on “Discipline Challenge: What My Mind Does When I Commit to Hard Things”