Fear seems to be a constant companion for every human being. We quickly learn to fear physical pain and almost as quickly, we start to be afraid of social pain: loneliness, ostracism or banishment.

However, 95% of our fears are not sensible. We fear them for the sake of being afraid. They serve no real purpose other than occupying our minds.

You can call the small fears worries, but it doesn’t change the mechanism. You still dwell on something that will never happen, and it robs you of your current moment. You could’ve enjoyed this moment or utilized it to create a better future for you.

Instead, you fret, worry and fear. 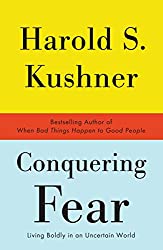 The Eerie Characteristic of Mind

When it comes to what can go wrong, human imagination is inexhaustible. You can fret over trivia – why your spouse looked at you with anger in the morning, or if you paid that due bill for electricity. And you can imagine the wildest scenarios, murder and mayhem, bankruptcy and starvation, all with the same serious attitude.

But when it comes to imagining positive scenarios, we are hopeless. Many people can imagine fairytales when they think about abundance: fancy summer houses, trips to exotic countries, expensive cars, wild sex, drugs & rock ‘n roll. However, all of those stories have a taste of something unattainable, something straight from a Hollywood movie that cannot really materialize in our lives.

Imagining small daily successes that will improve your daily life? It doesn’t come as naturally as vivid scenarios of even the smallest fears coming true.

So, how to avoid this default option?

Admit what scares you. Make an inventory of all your fears, or simply focus on those recurring on a daily basis. Those are the funniest, by the way. If you worry about losing your work every day, but you’ve kept it for the last couple of years, doesn’t it strike you as an oddity?

The truth will set you free. Say aloud what scares you. Don’t allow it to lurk only in your subconscious mind.

Thinking is your best option. If you don’t take a rational action, if you don’t examine your fears, take precautions or dismiss them as unrealistic, they will bounce randomly inside your skull. When you analyze your fears, you realize how irrational most of them are.

Quite often a worst-case scenario is coming back to your mind again and again. But when you name it and actually think about the slim chances it has to become true, you stop worrying about this nonsense.

Keeping your fears in your head, even when trying to consciously think them over, is a losing proposition. You are on the territory of your enemy there, and you need to proceed with triple caution. Your subconscious mind can get quiet after one lost battle with reasoning, but it will keep hammering you back with its fears and repeat silly arguments about the end of your world.

Take the battle where your opponent is the weakest. Write down your fears and arguments, why you really shouldn’t have been worried about 99% of them. Write down the arguments of your subconscious mind as well. When they land on paper, they look like what they are – silly ruminations of a primitive creature. They almost never have anything to do with reason. They are a pure game of raw emotions.

Once you capture your subconscious incoherent blather on paper, its attack in your mind will be much less vicious. When anxiety appears, you will be able to state, “Oh, this is that nonsense again, I’ve already discussed that with you; there is nothing to worry about.”

Often, we fear so many abstract things that it’s downright impossible to face your fears. Those are meant to be written down and dismissed. Right now, I’m fearful of going from full-time to half-time in my day job and increasing my commitment into my business. You know, the usual stuff: failure, poverty, and my wife will dump me. Maybe I’ll even start to console my nerves with alcohol and degrade into a tramp.

I have nothing to act against this fear. First, I need to transition from full-time to half-time, which is still a couple of months ahead of me. Then, I need to fail and use up all of my funds that are dedicated for the transition period. Only after a year or so, those fears may come true. That’s why reasoning, clarity and a written action plan is a much better solution to deal with this kind of elusive terror.

However, many times it’s in your power to face your fears, but you are paralyzed. You act with timidity. You avoid actions that may confront you with your fears. Your life is controlled by fear, not by you.

In that case, you should muster some courage and face them.

A Story of Dealing with Fear

My mentor told a story of a guy who was terrorized by his mother-in-law for 16 years. His mastermind convinced him that he should face her and set some boundaries. He sat down with her and explained to her that her messing with his family is affecting them very negatively. He politely and diplomatically told her to back off.

And she backed off. Her respect to that guy grew immensely. My mentor reported the guy’s disbelief at how much better his life is nowadays and his regret that he hasn’t spoken up earlier.

Consider this: your fears, almost always, are not real. When you face them, you rob them of all the power. Your chicken mind realizes that the end of the world hasn’t happened. It starts to probe other possibilities, positive scenarios that can improve your life, avenues that lead to action, not paralysis. And only action can bring you results.

You don’t need to be a hero and face your fears heads on, like the guy my mentor told me about. This is by far the most effective method, but I fully grasp that when you were immobilized by fear for a long time, it’s hard to change yourself.

You can dismantle your fears bit by bit. You can get used to overcoming them slowly and gradually.

Once upon a time, I was fearful of one-on-one interactions with strangers. I was terrified, especially when it came to interactions with attractive women. I had butterflies in my stomach, I sweated like a pig, my heart was pounding, and I couldn’t utter a word. Approaching a woman released such a strong emotional response in my body that I literally felt sick!

After many unsuccessful attempts of striking a conversation with a stranger, I decided to scale my actions way down. First, I started to notice and observe people around me. Then, I used my imagination to converse with people in my mind. Next, I started to make eye contact. After making eye contact, I started to smile at them. Within several weeks, I was able to tell strangers “Hi” or give them some minor compliment. In several months, I overcame my shyness completely.

The worst thing your fears do to you is not the emotional mess you become, however huge this mess can be. It wasn’t sweating, shaking and heart pounding I experienced that created the greatest disservice.

Fear paralyses you into doing nothing. When you do nothing, nothing can change. You stay stuck in the exact same situation indefinitely.

Your fears rob you of action, the only means that can bring you change, improvement and progress.

It is the main reason why we don’t progress as fast as we could. Passivity is a surefire path to failure. You attempt nothing, so you don’t get anything.

However, when you take action, everything can happen.

I made a couple of new friendships thanks to my encounters with strangers. I became more self-confident to the point that I was completely relaxed on a job interview and got a much better job (the one I’m walking away from now).

Deal with your fears. Disperse them, ridicule them or face them. Stop letting them prevent you from taking action. That is your only way to a better life.